From Terre di Himera we travelled east to Aeolian Islands. From the port area in Milazzo we travelled by hydrofoil to the island of Vulcano, where we were greeted by tufts of billowing, volcanic smoke. The next two days we nested at our island retreat practicing the art of relaxation. For the next 48 hours, whether from the room, pool or patio, we set our gaze out on the view: the deep blue water, the craggy island of Lipari across from us and volcano island of Stromboli off in the distance.

Being that it was early on in the tourist season, and the hotel had just opened a few days before our arrival, we literally had the place to ourselves. In some sense, we had the odd feeling that we had crashed an Italian holiday. This is because most of the guests of the hotel at this point were actually staff. For example, there was the sweet old painter, with his big toothless grin. During the day he worked quietly and steadily alongside us as we lunched. In the evening, he would materialize at the bar all cleaned up drinking grappa and enjoying the piano music with his cronies. (By night two Brent was sending a grappa or two his way.)  It was the same with the pianist, whose girlfriend also hung about, and the maintenance men who seemed to be enjoying themselves around the pool area when they weren’t working. We found it all very amusing.

We read about the possibility of bathing in the volcanic mud baths but were put off by the strong advisories: don’t stay in longer than 10-15 minutes (the water is radioactive), don’t use your favorite towel or swimsuit as the smell will make you want to destroy it, don’t parade about barefooted for the hot air vents will scald your feet, don’t bath in the mud if you have sulfite allergies, etc and so on. We did do our best to save the pool man from death by boredom. He was fanatical about keeping the pool area tidy.

In the food department, honorable mention goes to their wood fired pizza, which was one of the best we’ve ever had. Breakfast too was most impressive. Our first morning down, the manager gave us a “tour” of the buffet, including a table with nine different types of local honey, jars and jars of jam, and a dozen different types of milk. The quantity of food was verging on ridiculous even before you took into account there were only about a dozen guests in the hotel. More than plenty for that staff at least.

For more pictures, check out our Aeolian Islands photo album dated 5th May 2014 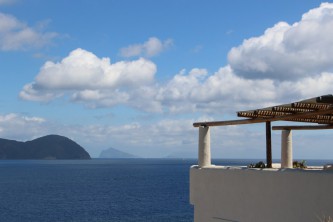